The cougar, or mountain lion, is Canada’s largest wild cat. An adult male cougar weighs between 63 and 90 kg, and a female between 40 and 50 kg.

Cougars are solitary, except for mothers with young. Their prey species include deer, wild sheep, elk, rabbits, birds and other small animals.

Most active at dusk and dawn, cougars can roam and hunt throughout the day or night in all seasons. They have ranges up to 300 sq km and may roam up to 80 km in a single day.

During late spring and summer, one to two year old cougars become independent of their mothers. While attempting to find a home range, these young cats often roam widely in search of an unoccupied territory. This is when they are most likely to come into contact with people.

There is a healthy population of cougar in Alberta and British Columbia. 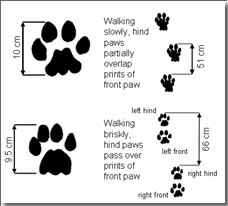 Although your chances of seeing one of these elusive cats is slim, you need to be aware of their existence when in cougar country. Cougars mark their territory along trails, under trees, or on the edge of a ridge. They use mounds of scraped and scratched earth, pine needles and other forest litter, soaked with urine and feces. The feces are ususally large, partially covered and contain hair and bone fragments.

Cougar tracks look like those of a house cat, only much larger -the size of a baseball. The tracks have four toes with three distinct lobes present at the base of the pad. Claws usually do not leave imprints. The front paw is always larger than the back paw mark.

When in Cougar Country

Cougars are predators at the top of the food chain, and their actions are often unpredictable. Following these general guidelines will reduce the risk of cougar conflict:

Cougars seem to be attracted to children, due to their high pitched voices, small size and erratic movements which are all similar to small prey animals.

Talk to children and teach them what to do if they encounter a cougar. Encourage them to play in groups, and always supervise children playing outdoors in cougar country

A dog is an effective early warning system, as they see, smell and hear a cougar sooner than people

If You Meet A Cougar

Cougars are a vital part of Canada’s diverse wildlife. Seeing a cougar should be an exciting, rewarding experience, with both you and the cougar coming away unharmed. Prevention is better than confrontation, so prepare yourself before venturing into their habitat.